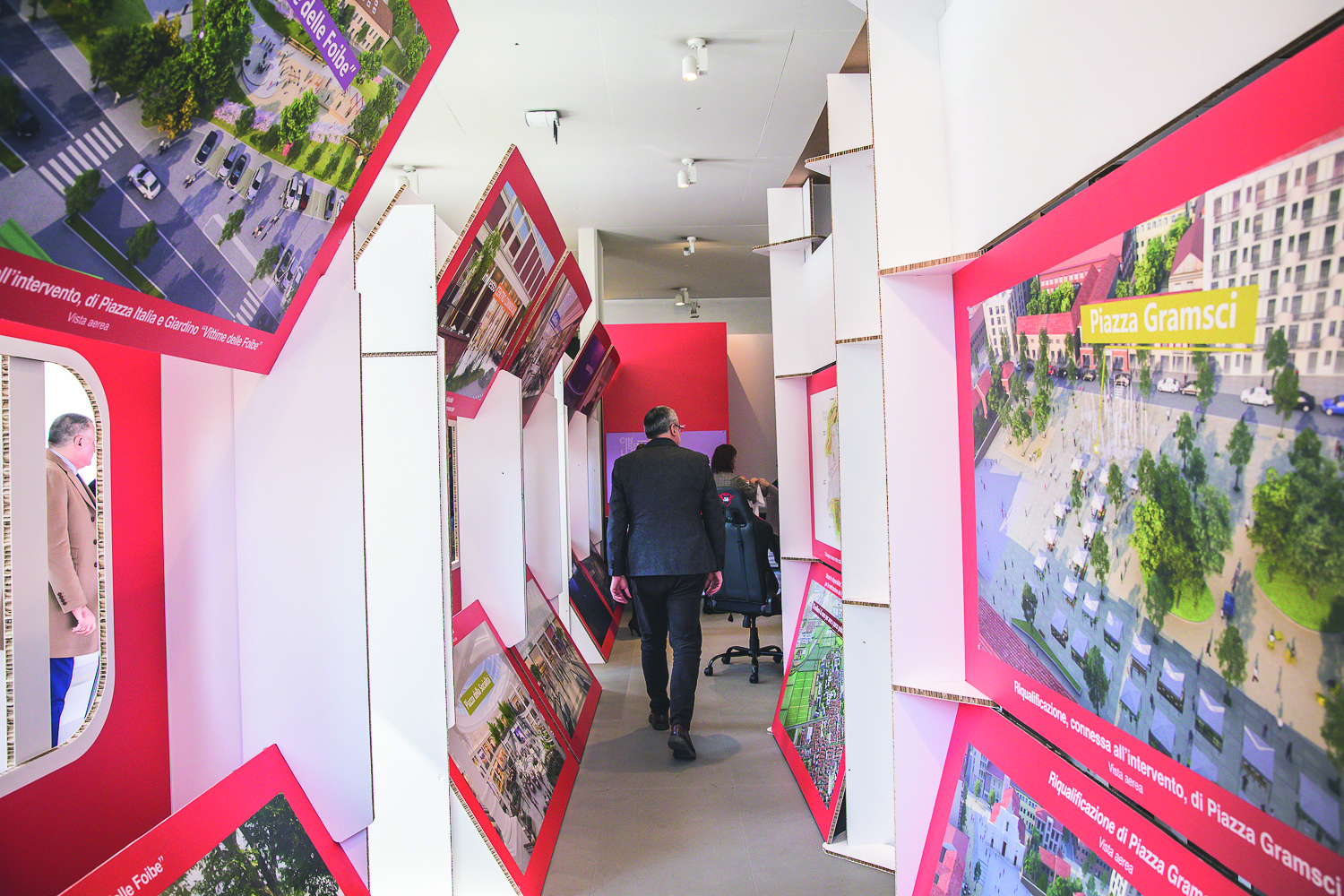 There is a Sassari company behind the project of promotion and communication of the new intermodal hub which will shorten the distances between Milan, Cinisello Balsamo, Monza and Brianza. With a nine and a half metre long honeycomb cardboard railway carriage and a national advertising campaign, Antonello Fadda’s Character has produced an innovative message to launch the future Cinisello Balsamo intermodal centre, which will be the new terminal of the M1 and M5 lines. Antonello Fadda’s eyes shine with satisfaction because the idea, developed with the staff of his communication company – cardboard furniture, ecological digital printing and graphics – received only compliments last Friday, the day of the official presentation of the project, and the thousands of visitors who participated in the event confirmed that the message had reached its target. “I am proud because a Sardinian company has shown itself to be second to none in terms of ideas, innovation and experience”. “CiniselloHub” is a plan which, by recovering the “Bettola” area, will provide a link with the metropolitan city thanks to public and private capital and a cost of thirty million euro. In practice, in addition to the new underground terminal and a bus station, an interchange car park with over 7,500 parking spaces will be built, as well as a 4.5 km cycle path linked to the nearby Grugnotorto park, and a multifunctional complex. In the area, people will be able to choose different forms of mobility: metro, train and bus or bicycle and the availability of parking lots will invite them to leave their cars at home. “Once completed, people will be able to reach Milan by metro without having to change carrier three times as is the case today,” explains Antonello Fadda. For such an impressive project there was obviously a need for a communication campaign able to strike the collective imagination and intrigue travellers and professional persons. And so, the staff of the Character offices in Predda Niedda set to work involving the company Plib and Alberto Paba. And they created the “stop of the future”, starting precisely from that full-scale ecological metro carriage made of cardboard inside which visitors can experience the journey as it will be thanks to virtual reality. Until 22 April, for a whole month, visitors can therefore enjoy discovering the intermodal hub at the “Il Pertini” Cultural Centre in Cinisello B thanks to the 3-D installation which includes screened and media videos. “A campaign which is also eco-friendly: we wanted to put the Hub at the centre of the project and try and give everyone the perception of what the future holds in store and all the ensuing benefits from all points of view,” explains Fadda. And here are the figures of the Sassari company: 500 square metres of ecological cardboard printed with water-based inks, 40,000 brochures produced, 50,000 postcards, 50,000 bookmarks, 5,000 t-shirts featuring printed tailor-made Hello! “And two maxi totems each three and a half metres high, 200 square metres of outdoor carpets depicting the route of the two underground lines and the entire Hub space, three virtual area workstations with iPhoneX and two 75” monitors. All supported by a web area (website and dedicated social channels), equipped press area, hostess service and logistics. “When I proposed the information and advertising campaign to the City Council, I found enthusiastic support – says Fadda – and now that we have made it I am very pleased with the successful outcome”.

Next stop “Cinisello Hub”: the metro in the outskirts of Monza will reach the citadel of the future.